Finally! A decent lens for one of my favorite cameras. A couple of weeks ago, I purchased the Voigtländer 21mm F1.8 lens. It is a lens that I have wanted for a very long time, and one that makes sense, since I’ll be using it on the APS-C sized Epson R-D1.

The lens is built like a tank. I was expecting it to be a lot smaller. I was slightly disappointed at first, but as I became accustomed to its weight distribution and ergonomics its size became a non-factor. I usually buy used here in Japan, but I couldn’t find a used version of this lens, so I bought it new. The lens is actually a lot more affordable here in Japan than it is in other countries.

On the Epson R-D1, its focal length is somewhere around 32mm. Which is perfect for an everyday lens. The 1.8 f-stop also makes it good for pretty much any situation. I try not to shoot above ISO 400 on the Epson, so the extra speed is very helpful. When it comes to lenses, I personally prefer resolving power over contrast. I’m not going to display MTF charts for the lens, but I will say that I’m very happy with the shots that I’ve got with this combo (Epson R-D1 + Voigtländer 21mm). Seeing as how Voigtländer designed the body of the Epson (it looks just like a Bessa), the marriage is fitting. You can draw your own conclusions after seeing the pictures. 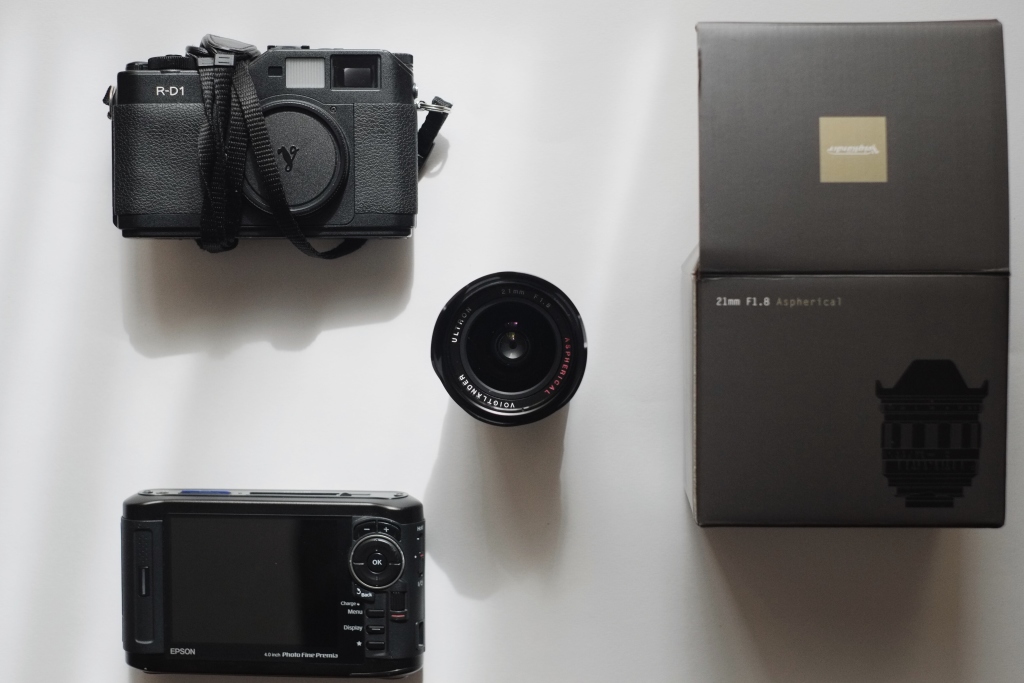 All of the shots were taken in Nagasaki. The process of shooting with this combo is also a lot of fun. Whenever I shoot on the Epson I shoot RAW, I don’t even bother with the JPEGs, since the camera can only handle a 2GB memory card. After which I edit all of the photos on my Epson P-7000 (I’m not being paid by Epson, I swear), and convert the ones I like to JPEGs. I also never use my screen while shooting. Basically I’ve set up a digital processing lab, needlessly albeit.

The lens is a Leica M-mount, making it usable on pretty much any camera that has an interchangeable lens mount (with an adapter of course), and also nice for that fateful day I buy a black Leica M9, or M9-P.

Usually with a lens at this focal length, people are concerned about the corners, vignetting and distortion. Since all of my shots have been taken on an APS-C sized camera, I can’t really speak much on this. I will say that from the shots that I’ve taken distortion has not been a problem at all. I taken this lens out twice since I’ve had it. The second time was for a festival, and I also took my X-Pro1. I barely shot with the X-Pro, until I ran out of space on the Epson. Mostly because it’s just so much fun to shoot on the Epson. Pictures from the festival will be posted in the near future. In the test shots from Nagasaki, I’ve tried to include as many different situations as possible. Low light, Long distance, medium distance, short distance, etc. Keep in mind that everything was shot on a camera that is over ten years old.

*Use your mouse to swipe to the next picture. Only the exposure level has been edited on these test shots.

Selfie from the boat.

Short-distance test shot. The minimum focus distance on the lens is around 20".

The only other lens that comes close to this speed at this focal length is the Leica 21mm Summilux and it costs somewhere around $8000.